The Rideau Arcott was originally a research breed selected for their lambing rate. The Arcott breeding program began in 1966 when Agriculture Canada’s Animal Research Centre in Ottawa began expanding its mixed flock of Shropshire, Suffolk and OS sheep. One of the goals was to create a breed which reproduced rapidly. This breed is used at Craigmore for its outstanding maternal characteristics and to cross breed with Romanovs.

Finnish Landrace, Southdown, East Friesian, Suffolk, Leicester, North Country Cheviot, Romnlet, Dorset Horn, Shropshire and Ile-de-France were the dominant template used in the creation of the three Arcott breeds, Canadian, Outaouais and Rideau. By 1972, the introduction of new genetic material to the bloodlines was stopped and the flock was quarantined for two years. In 1974 the flock was split into two groups and an accelerated lambing program was put in place. In 1980, techniques developed to create Specific Pathogen Free (SPF) animals were used to create a disease free Arcott flock and by 1982 all three Arcotts were recognized as distinct breeds.

Although developed for research purposes, the 8 month production cycle of the Rideau Arcott as well as its propensity for having triplets, quickly caught the eye of Canadian sheep farmers. Between 1982 and 1986, Agriculture Canada continued the minimum of selection necessary to maintain the genetic base for the breeds. In 1986, the Canadian Sheep Breeders Association recognized the Rideau Arcott commercially.

Ewes can be bred at 7 months of age to lamb on their anniversary. The first lambing averages 1.7 young while subsequent births, every 8 months, average 2.5 lambs each. 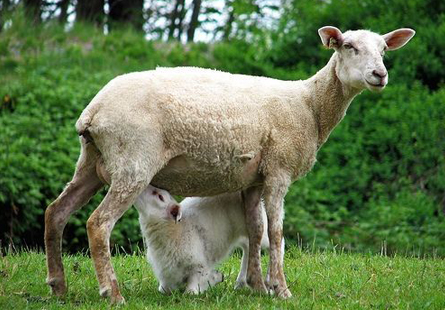